Sometimes when I’m traveling, I wonder, ‘Why am I really doing this?’ and ‘What is traveling really for?’ After a while of thinking about my ‘why’, I figured that I’ve unintentionally been learning random things that will really help me in the real world. Of course there are way more than 5 things that a teen can learn from traveling, but here are 5 of the top things that I have noticed that I have learned the most about.

To give you a little bit of background knowledge, I grew up in the suburbs of Tampa, Florida. So basically the only bit of street smartness that I knew before traveling was ‘don’t talk to strangers’. After several close calls and dodgy moments during traveling, I’ve learned basic street smarts and the way of the city.

While walking around a bus station in Mendoza, Argentina, I was completely exhausted from a long day. I had all of my bags and other stuff, so I was an easy target for any pickpocket. Just in time, my mom noticed a suspicious man that was following and eyeing me.

Eventually she told me the situation, and once I was aware of the threat, the man walked away. That experience taught me the lesson to always be on top of my game, and never let my guard down while traveling. That was just one example of me learning street smart skills during my first 4 months of traveling around the world. I can expect to learn a lot more things over the next months.

I’m the organized type of person, but traveling pushes my organization skills to its limits. When I went to middle school, I used to forget and lose things at school all the time. Since I’m constantly moving while traveling, I have to be super organized in order to keep from losing stuff. I’ve been constantly improving and figuring out new ways to keep myself from forgetting things. So far, I’ve only lost a pair of socks.

Recently, I’ve been using checklists to make sure that I have everything that I need when I need it. Also, packing cubes have helped me organize my clothes into compartments, making everything easy to access. Traveling has helped me turn from a person who chronically lost stuff, to an organization freak.

I naturally hate changes. Unfortunately for me, traveling long term forces me to regularly change where I am, where I’m staying, and what I’m doing. I don’t like it, but I know that embracing changes will be helpful for me in the long term. In everyday life there are always unexpected changes that can throw you off course. Traveling has helped me respond to these types of situations. Nowadays, I always have a Plan B.

Through travel, coping with changes has come more naturally. For example, internet in South America is extremely volatile, meaning that at any time internet could shut off and I might not be able to do time sensitive school work, or other stuff. These problems have forced me to plan ahead and to expect the unexpected.

When my parents, sister and I lived in Uruguay for 2 months, we almost became locals. After a while, we started to notice the same people in the buses and we knew our way around most of Montevideo. We became completely immersed into the culture. Through that experience, I could see, and live how normal people lived in a different country. Traveling is the ultimate way to experience the lifestyle and culture of other people. From learning about cultures, you can then become more globally connected and understanding.

Travel can also force you to learn a new language. As a teen that went to the American public school system, I know first hand that it’s pretty much impossible to learn a language in school. A lot of times people tell you that you need to learn a language because it will help you find a good job, but a lot of teens don’t care about things like that.

On the other hand, when you are traveling, not knowing a language can mean not being able to order food, or other practical problems. That forces you to learn a language even if you don’t want to. I actually wanted to learn Spanish, so it helped my learning process along the way. Traveling is the best way to completely immerse to learn a language.

5. The Things That School Can’t Teach You

While traveling, I’ve learned so many random things that I never would have learned while going through the motions at home. I’ve learned a little bit from the many tourists and locals that I’ve met during my time traveling. While in a Spanish school in Montevideo, Uruguay, I learned about types of beers from my classmates. Then, while on an overland tour across South America, I learned about English food and slang from a couple from England. In La Paz, I learned about Bolivian politics from our tour guide. Without traveling, I would have never learned or even heard about these types of things. 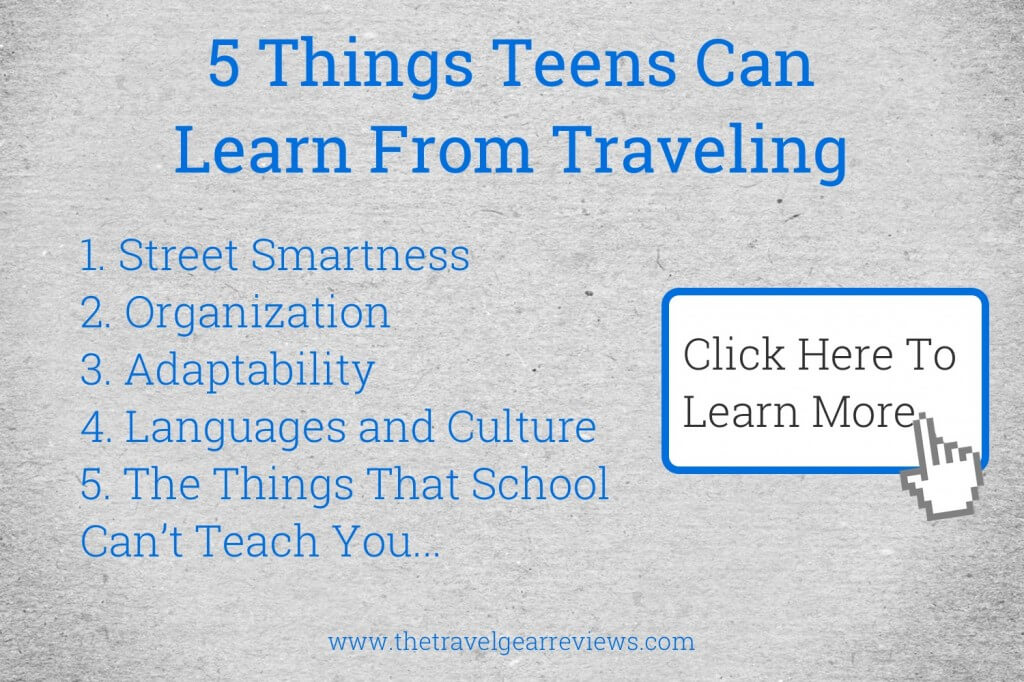 What have you learned from travel? Leave your comment below.