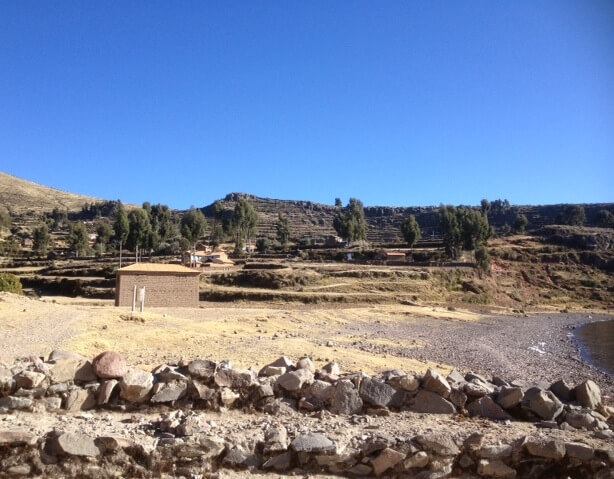 During my homestay in Lake Titicaca, I experienced how it was to live without electricity, and other luxuries that I consider normal. Here what I did:

My day started at 6:30 AM, when I had to get my REI Flash 18 Pack ready with all of my stuff. Then, I showered for the last time for about 36 hours. I headed down to the breakfast area of the hotel at around 7:00 AM. I had scrambled eggs, 2 pieces of toast, and fresh pineapple juice. After breakfast, I had some time to take our luggage down to the lobby to be stored. The rest of our stuff would be taken with us on the homestay.

At 8:00 AM, our tour group left the hotel to go to the dock. Someone had organized for bike taxis to take us there. The ride was really short, but exhilarating. I shared a taxi with my sister @bethanylooi and our biker weaved between cars and went pretty fast. Once at the dock, I learned that some of the bike taxi riders were as young as 15. Our tour guide for the homestay, Manuel went with the group. At the dock, we boarded a boat that could take about 25 people.

The first part of the boat ride took about 30 minutes. We stopped at a floating island made of reed. People actually were living on the floating islands and lived inside of reed huts. They had no plumbing, electricity or anything. There were a couple of solar panels to power lights, but that was it. Manuel told us about the islands, and an islander showed our group how the people made the floating islands of reed. It was an amazing experience, but after being informed, we were bombarded by locals who wanted to show us their huts and sell us random souvenirs. I didn’t buy anything; instead I just wandered around the island, which was really small. The ground was really spongy because it was completely made of dried reed. 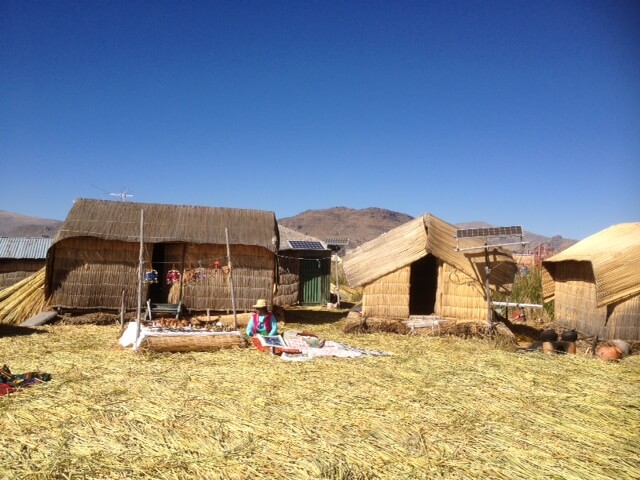 After visiting the floating island, we visited another island, then we went on the boat for another 3 hours until we made it to the island that we would be having the homestay on.  Thankfully, the homestay island was made of rock, and the people lived in houses. There still wasn’t electricity, but there were squat toilets.

We all disembarked the boat, and then took all of our stuff to a place where we were assigned to our host mothers. Every 4 tourists were assigned to one host mother. My mom, dad, sister and I, all had the same host mother, Gladys. Gladys then walked with us to her house, which was a long way up the island. The island was really rocky and mountainous, meaning that we would have to walk up with all of us stuff to get to her house. I was holding my daypack and a heavy box of gifts for our host family. We were told to bring fruits and things for kids for the host families, because it is hard for the islanders to get things like that on their remote island.

I was breathing extremely hard, and struggling because of the high altitude. Though it was hard to walk to her house, I really enjoyed pushing myself to go faster. In total, the walk to Gladys’s house took about 45 minutes of walking uphill.

Gladys’s house was really simple, but we had our own area with 4 beds. I noticed in the bedroom that Gladys had a license to have tourists in her house. After we put our stuff away in our room, we went to the kitchen for lunch.

It was already about 2:00 PM, so I was really hungry. The kitchen had a wood stove and a seating area. We started to help Gladys by setting the table, when we met Gladys’s mom, Juana and dad, Saturnnino. They all lived together, but there were no kids in the house. Before we ate, we presented the gifts to the family. They really appreciated the fruits.

Gladys spoke Quechua, which is the native language, Spanish, and a little bit of English. We mainly communicated with her through Spanish and we were able to understand most of the things that she said. Lunch was Quinoa Soup, and a plate of assorted potatoes, rice and a special kind of beans. I actually enjoyed the food, but the people on the island almost never eat meat, because it is very expensive for them.

The family had a couple of solar panels to power lights at night, but that is all the electricity that they have. Though they don’t have electricity, I noticed that they had 3 cellphones in their house, all which worked.

After lunch, we helped Gladys to get water from a well a bit higher up the island. I carried a large bucket of water, but we didn’t have to walk very far from her house. Once I was done carrying water, I went to the community center to play soccer on a basketball/futsal court. I played with a bunch of people from the tour group, and with some local kids. The altitude took its toll, but I still had a lot of fun.

At 4:00 PM, we had a group meeting with Manuel. Manuel told us about what we would be doing for the rest of the day, then explained that we could hike up to the top of the island to watch the sunset. I wasn’t very interested in watching the sunset, but I really wanted to hike up the island. I wasn’t about to wait for my parents, so I told them that I would be up on the top of the mountain and would wait for them. I hurried up the steep trail and passed a bunch of people to make it to the top of the island in about 20 minutes. At the top, there view was amazing, but it wasn’t a place that you could stay for very long. For a while, I was the only one from our group there, so it was a bit boring. It took 13 more minutes for my mom and dad and sister to come, but by then I was ready to leave. Instead of leaving, we stayed on the top of the island and watched the sunset. By the time the sun was about to set, the whole top of the island was crowded with tourists. It was getting cold and dark, so we left just as the sun had set.

Once we were back to Gladys’s house, it was pitch black outside. The stars were completely clear because there was no light pollution. There was some free time before dinner, where we could talk with other tourists one of the only stores in the island. Basically our whole tour group bought drinks like hot chocolate in the store. The shop happened to be owned by Gladys’s family.

My parents, sister and I headed back to our host family’s house for dinner, where we met up with Juana, who was cooking. We helped with a bit of the cooking, but she was almost done when we were back. The host family ate dinner with us. We had vegetable soup, and rice with potatoes, beans and other vegetables.

I had been having stomach problems the whole day to say the least. It was possibly due to the altitude and/or the food. To make matters worst, the bathrooms were a bit primitive. It was almost like an outhouse, because it wasn’t connected to the rest of the house. During the night, the bathrooms had no light meaning that we needed to use our flashlights. There were two squat toilets that needed to be flushed by pouring buckets of water. Thankfully, after going, I felt a bit better.

At 8:20 PM, there was a dance in native clothing planned for all of the tourists. By that time, I was ready to go to bed, but I had go to the dance party in my special native poncho thing on. At the party, everyone had to wear the native clothes. I was half asleep while doing local dances and listening to the native music. I never really got into it, because at 9:00 PM I was about ready to collapse.

Our family went back to our host family’s house to sleep. I was so tired that I fell asleep in my normal clothes.

Have you ever been overly exhausted while traveling? Leave your comment below.

« My Bolivian Beanie
Sandboarding in Peru »