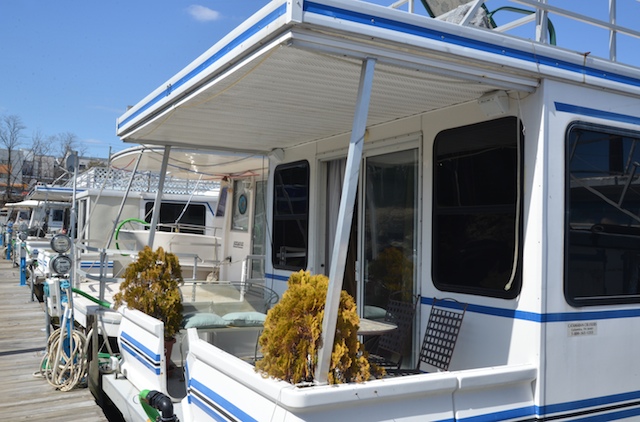 After staying in the heart of New York City for over a month, it was time for us to take a break from the city chaos and escape to the far unknown land of Brooklyn. My mom found an interesting property in AirBnB that happened to be a houseboat in Brooklyn, about 45 minutes away from Manhattan by train plus a 10 minute bus ride to the train station, so we decided to act on it and stay there.

We took a taxi to the location of the boat, and then 30 minutes later we arrived – to a parking lot bordered by a green fence. At first I thought to myself, “Where’s the boat, let alone the water?” I was standing in the middle of a parking lot in a suburban community in Brooklyn. That was when my mom said that there was a gate in the fence that led to the dock. 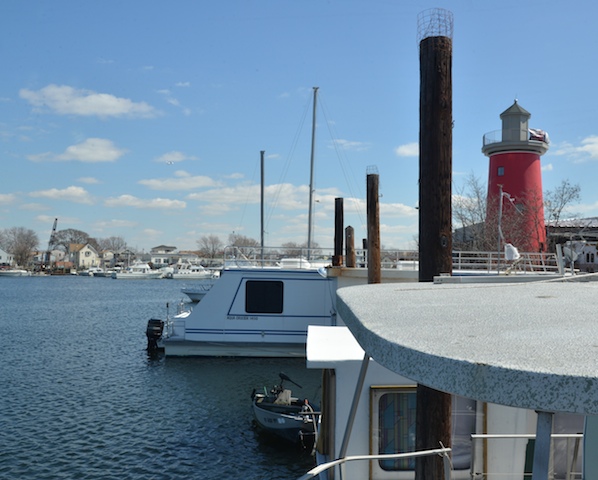 We walked to the gate with all of our luggage and long-term travel backpacks, and then found the owner of the AirBnB apartment houseboat waiting for us on the dock. I never would have imagined that there were around 15 houseboats just behind the green fence. We walked down the pier and then hopped on the houseboat that we would be living in for the next 2 weeks. Right when I stepped on the boat, I felt it rocked. I guess the slight rocking was the only thing that reminded me that I was on a boat.

The interior of the houseboat was really cozy and clean (shout out to the AirBnB host). Eventually I organized all of my clothes and gadgets thanks to my hanging Eagle Creek Packing cube. There wasn’t much space around, but I was used to that after living in the city and by staying in other AirBnB apartments for 100+ days. To give you an idea of the size, the interior of the houseboat not including balcony space was exactly 25ft by 12ft, so 300 sq ft (I measured it with a tape measure). 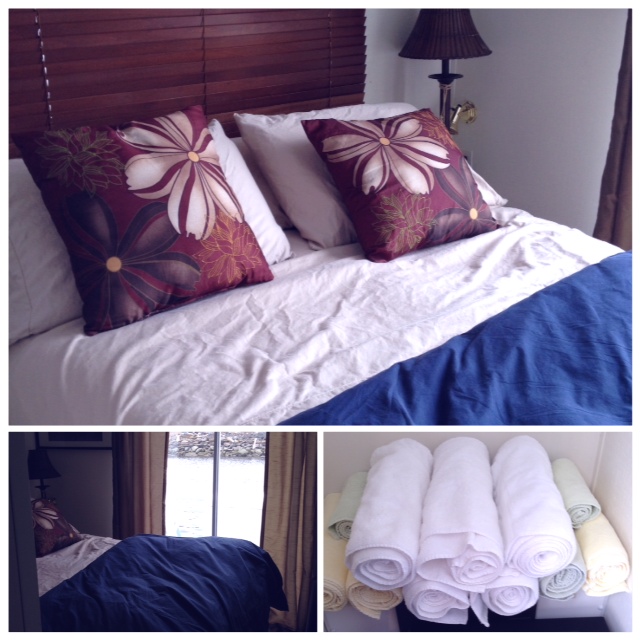 The 300 sq ft were utilized pretty well and you could think of the entire houseboat as 3 100 sq ft rectangles roughly. The first rectangle closest to the entrance was like a living room with cable television and a convertible sofa bed. The second rectangle contained a kitchen and dining area. There was a microwave, two stovetops, a full sized fridge, a sink, countertops, cabinets filled with plates and utensils, etc. The small seating area contained a table and four chairs. The final rectangle contained the master bedroom and the bathroom. The bathroom of the houseboat had a tiny shower, a sink and a toilet like the type you would find on an airplane or cruise ship.

During the first few days on the boat, I didn’t feel completely well because of the slightest rocking. I’m not the best when it comes to enduring choppy waters and I learned that the hard way during an 11-day cruise, but that’s another story. The water around the houseboat was extremely calm since it was only 10 feet from the shore and very shallow. On some days when it was very windy out, I seemed to be extremely sensitive to the movements, because I had a headache during the windiest days. I should stress that the boat really didn’t rock that much, it was probably just me because the rest of my family didn’t seem to have an issue. When it was windy out, the rocking was noticeable but nowhere near violent. After about 3 days, I got used to the rocking and it wasn’t bad after all, I even started to feel like I was swaying while on solid ground.

Without a doubt, my favorite part about the houseboat was the rooftop. There was a small balcony at the front of the houseboat, and another small balcony at the back. One of the balconies had a steep staircase that led to the uncovered rooftop of the houseboat. It was extremely windy and cold when we were at the houseboat since it was the end of winter, but it was still enjoyable to stay up there and do some schoolwork. Staying on the rooftop actually made it feel like I was on a boat, except I wasn’t moving. Though, the view from the boat wasn’t anything special as you could only see the tops of the neighboring houseboats, some water, and a truck stop.

Just to clarify, the boat does not have an engine and doesn’t actually go anywhere 🙁 Overall, I think it was a fun and different experience to stay in a houseboat.