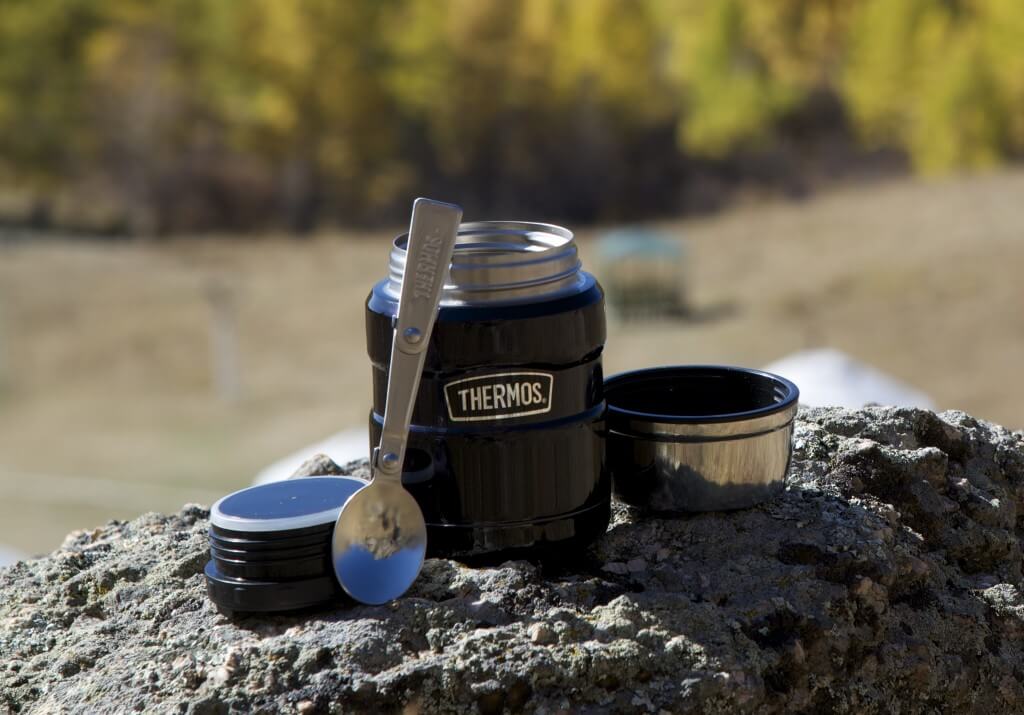 Prior to embarking on the Trans-Mongolian Railway from Moscow, Russia to Ulaanbaatar, Mongolia, I read that I’d have to bring my own food for the entire 7+ day train ride. While there wasn’t food in the passenger train cars, there was an abundance of hot water, meaning that I could cook some instant noodles and even oatmeal inside my train compartment if I had a proper container. This led to me looking for the best food jar / Thermos which I could use during the train ride. Eventually I chose the Thermos Stainless King after seeing that it was one of the most popular products on Amazon.com.

After using the Thermos for the marathon train ride and beyond, I can confirm that the Thermos does not disappoint. Since purchasing the Thermos, I have used it for cooking oatmeal, cooking instant noodles, making tea, drinking hot chocolate and more.

The first feature you’ll notice when you see the Thermos Stainless King jar is its rugged, almost masculine look and feel. The entire Thermos, except for the lids, is made of stainless steel and holds 16oz of food, which isn’t a huge amount, but was good enough for me on the train. The container has a wide opening which makes it easy to clean and to eat out of. In addition, the Thermos sports two lids, the first one being a thick plastic screwable stopper with a silicone gasket, and the outer lid being stainless steel on the outside and plastic on the inside which I have occasionally used as a cup. I’m not sure if the outer lid was meant to be used as a cup, but it has been useful, though shallower than most normal cups.

According to Thermos, the Stainless King food jar can keep items hot for 7 hours and cold for 9 hours. The description is extremely vague though, since the words ‘hot’ and ‘cold’ are extremely subjective. Prior to purchasing the product, I wasn’t sure what this exactly meant, so I tried it out myself.

My experimentation was neither formal nor scientific, but I did find that if I put boiling water into the food jar at night before I went to bed, the water would be warm the next morning, around 8 or 9 hours later. I was generally impressed.

The foldable metal spoon is a nice add on as well. The spoon is secured between the outer lid and inner lid and can be unfolded into a full sized spoon.

Considering that the Thermos food jar can only hold 16oz, its exterior is quite large and heavy. Stainless steel isn’t the lightest of materials and the insulating layers take up a lot of space. At 0.9 pounds, it isn’t the lightest container, and you may not want to take this with you if you’re an ultralight packer.

As much as the Thermos is durable, I’ve noticed that it is prone to scratches and dents if you aren’t careful. Mine has a minor dent on its lid from the time when I stored the Thermos in my backpack’s side water bottle pocket and accidentally dropped my backpack onto a concrete surface. Maybe Thermos should add a rubberized base and rubberized ‘bumpers’ to the container, similar to the Thermos Element5.

Another issue that I’ve come across with this Thermos is that it is hard to manage all of the lids when unscrewed. If you don’t have a table to place the lids while opening or using the Thermos, it will be difficult for you to hold both lids and spoon while drinking or eating from the container. It would be nice if you could somehow attach the lids to the bottom of the Thermos so that you could drink or eat from the Thermos without having to hold the lids.

Important Note: According to the description of the jar on Amazon.com, the Thermos Stainless King can only be washed by hand, in other words not dishwasher safe. In my opinion, though I haven’t tried it, the Thermos seems sturdy enough to be washed in a dishwasher without any issues, but I guess Thermos feels it would be better for you to hand wash it.

Overall, the Thermos Stainless King food jar is a really solid and well made product that can keep your food or drink cold or hot for an impressive amount of time. The main drawbacks about the jar is its weight and bulkiness. The Thermos costs retail $29.99, but I’ve seen it on Amazon.com for a few dollars cheaper than that. The price normal for food jars of similar size and quality. I’d recommend the product to anyone looking for a durable and extremely insulating food jar but isn’t too concerned about weight.

Some other food jars which may be of interest to you if you would rather have a lighter and less bulky container are the Thermos Element5, which I’ve read some good reviews of but haven’t tried, and the Thermos 16-Ounce Stainless Steel Food Jar, which seems less masculine and less bulky.

Some links found in this website are affiliate links, meaning that we get a commission if you decide to make a purchase, at no additional cost to you. This helps to fund the site 🙂 I would never endorse a product or service I didn’t actually use and believe in.

Do you have any questions or comments about this product? Leave your comment below.