I guess what could have been a boring museum trip turned out to be pretty exciting after all. We happened to be one of hundreds of tourists to visit the Guggenheim Museum in Upper East Side of New York City on the pay-what-you-can day on Saturday, February 22, 2014.

The Guggenheim is known for its unique spiral architecture, but isn’t the type of place that I would expect to have a protest. Our family waited in the seemingly never-ending line that spanned about 6 blocks to enter the museum for more than an hour (in the cold). Thankfully, I got more than I paid for in a way that I could never have expected. The inside of the museum was pretty chaotic to begin with. When we first walked inside, everyone was elbow to elbow and there were obnoxious tourists (myself included) taking pictures of everything. Pictures were allowed on the bottom floor but strictly prohibited on the upper levels. That rule didn’t make very much sense, and I learned it the hard way after a museum security guard barked at me to put my iPhone away.

Once we paid what we wanted, we made our way up the ramp to the first exhibit, then viewed some pieces for the next 15 minutes. That was when we heard a loud trumpet blow, and then a group of people unfurled their banners and started chanting.

Almost everyone in the museum walked over to the railings of the museum to view the commotion. It was probably one of the strangest situations that I’ve been caught in, since no one really knew what to do about it. The protest basically was a couple of minutes of chaos where all no normal rules applied to museumgoers and tourists alike. People were yelling and taking pictures all under the cover of the confusion. A man on the ground level wore a red cape and blew a trumpet, while all of the protesters, at least 30 of them, lined up along the railings of the museum. Next to the man in the cape was a woman who might have been the leader of the campaign, because she was leading the chants. There was a group of demonstrators on every level, showing that the protest was obviously planned out carefully.

Several people, myself included, took pictures of the commotion without the interruption of security guards. The museum security guards seemed confused and apparently didn’t know whether they should have kicked the protesters out, or just let them be.

The chants of the protesters were incomprehensible since the sounds echoed in the Guggenheim. The only phrase that I could understand was “Is this the future of art?” The banners that the demonstrators held contained phrases including “Debt Spiral”, “Wage Theft” and “Abu Dhabi”. At first this made no sense to me, but then I was able to put the pieces together once I read the flyer that the protesters then handed out after their chants. 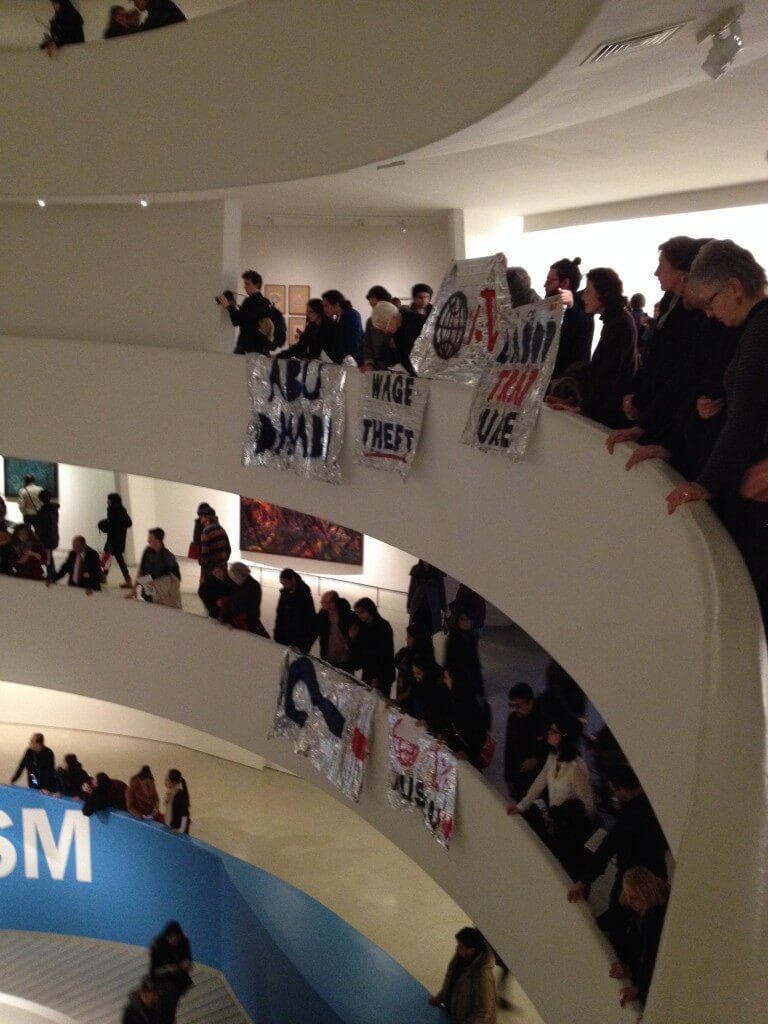 It turned out that the protesters were campaigning against the labor conditions of the workers who were constructing the new Guggenheim Museum in Abu Dhabi. The demonstrators seemed to escape under the radar after handing out flyers, though I did see a couple of NYPD officers walking around after the situation. After the demonstration, most people in the museum seemed to carry on with their normal lives, though a few security guards seemed a bit shell shocked.

My afterthought: The fact that a group of people who overtly held banners and chanted were not controlled/detained by the security is beyond me. In my opinion, this situation could have become a huge failure on the security guards’ part if some form of violence were to break out. This proves that the museum security guards are merely men and woman in suits who don’t actually know how to handle a potentially dangerous situation.

Have you ever been stuck in a protest or strange situation? Leave your comment below.