Many great inventions are the product of two inventions merged together, like ambulances (car + hospital) and chainsaws (saw + chain). Likewise, the Lingo Phrasebook Playing Cards are a merge between flashcards and playing cards. 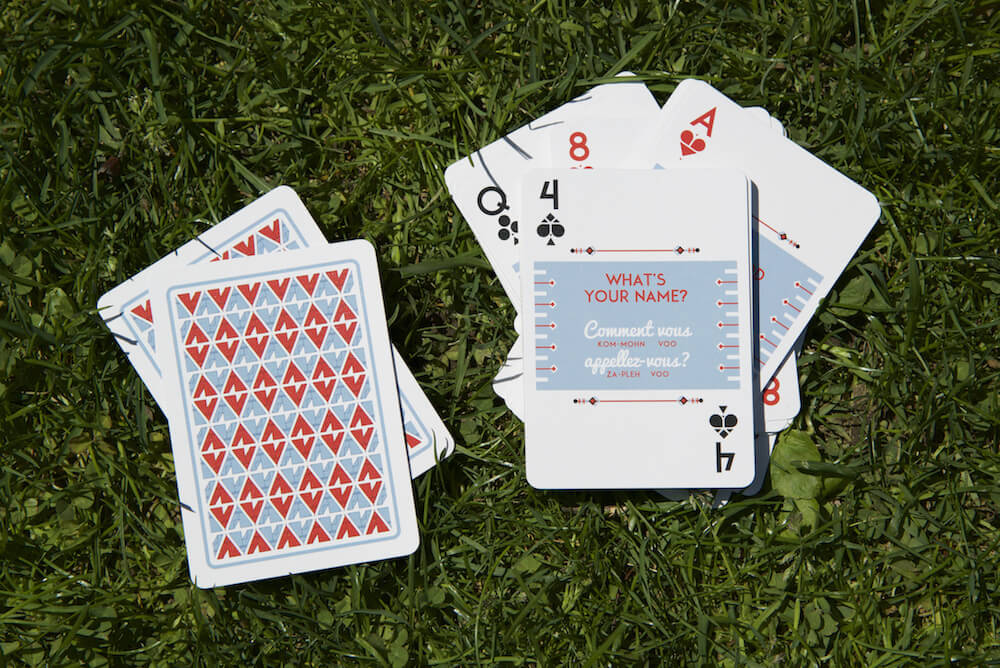 Lingo Playing Cards are basically a deck of 54 playing cards (a standard 52 deck + 2 jokers) each card with a unique phrase in English then translated to another language, in my deck’s case French. Every card has it’s own practical phrase or word which you will probably need to say when traveling.

I was recently given the opportunity to test a deck of Lingo cards with French phrases, and here’s my take on the cards: 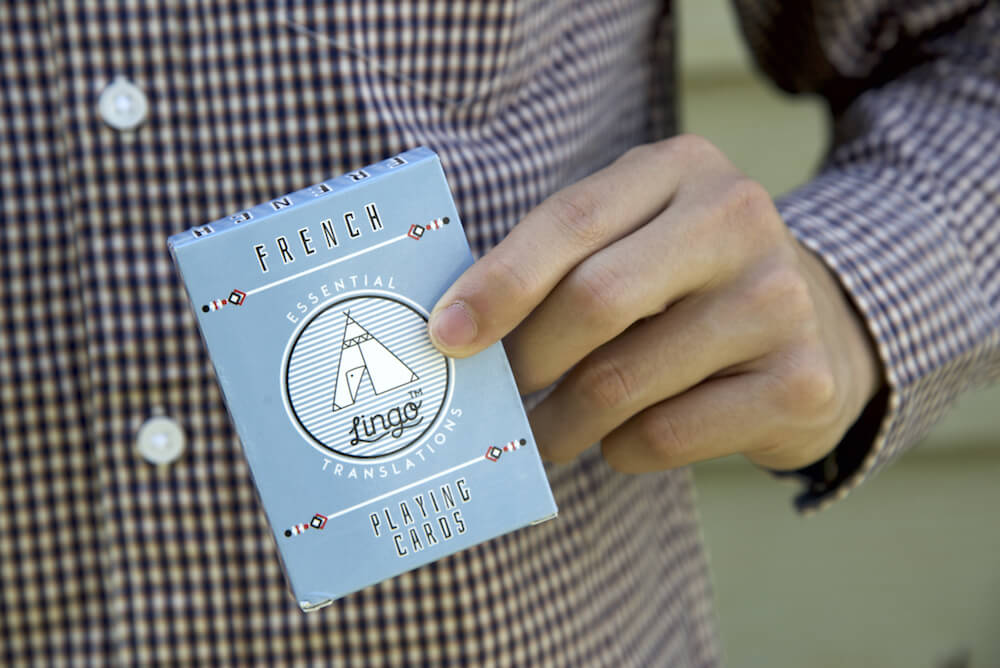 As you can see in the first picture, the cards first have the phrase in English, then the French phrase below it and finally the pronunciation.

Example phrases and words found on the cards:

The jokers are a little bit different in their set up, with multiple numbers and their pronunciations:

More pictures of individual cards and their phrases can be found at the Phrasebook Playing Cards already-funded Kickstarter campaign.

The cards themselves are high quality and meant to survive the perils of being thrown into a backpack and traveling around the world.

I really like the design of the cards as well. The illustrations of the face cards are extremely detailed and everything flows. While the phrases are central to the cards, they don’t interfere with gameplay. 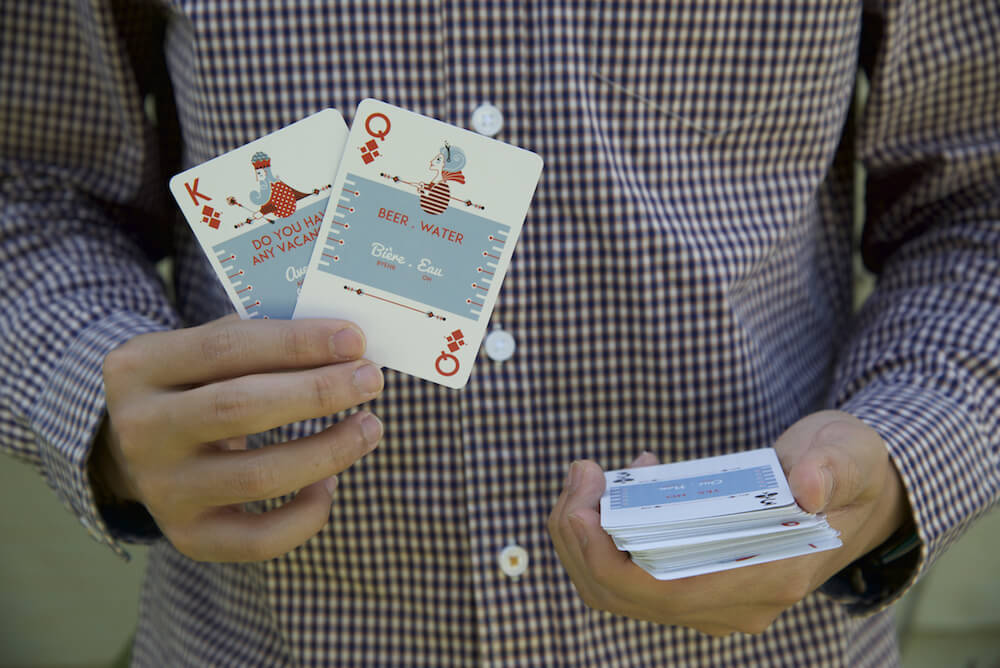 I’ll admit, I didn’t pack a deck of cards with me during my RTW due to limited space in my Kelty Redwing 50 backpack. Cards aren’t large or heavy, but nowadays it seems that most people would rather play Candy Crush than a card game.

Although cards may be on the decline, I think they would be great for traveler bonding moments with other travelers you come across at hostels and other places. They’re an alternative to staring at a phone and also a great conversation piece.

If you are able to get by with a language, the phrases found on the Lingo Playing Cards might be too basic for you, but considering I can’t even count to 5 in French, the cards are perfect. 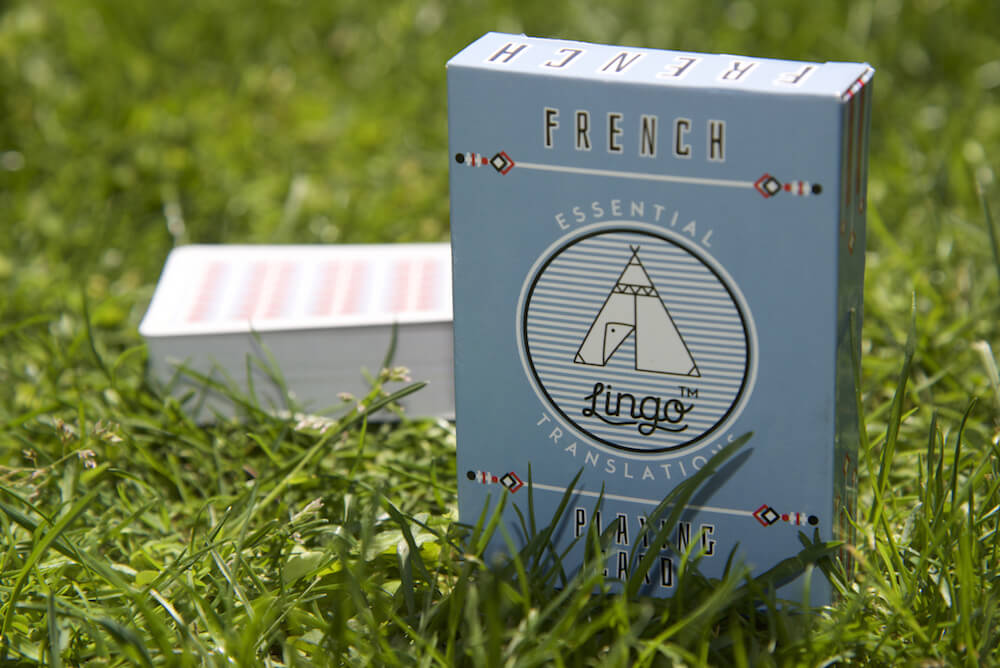 The Lingo Phrasebook Playing Cards are high quality cards that allow you to learn another language at the same time. Currently, Lingo makes French, Indonesian, Spanish and Italian Phrasebook playing cards. Overall, I think the cards are a great concept.

I’d love to see tour companies like G Adventures and Tucan Travel have decks of Lingo Phrasebook cards in their overland trucks and for hostels to have decks for foreign guests to use.

Where to Get it: