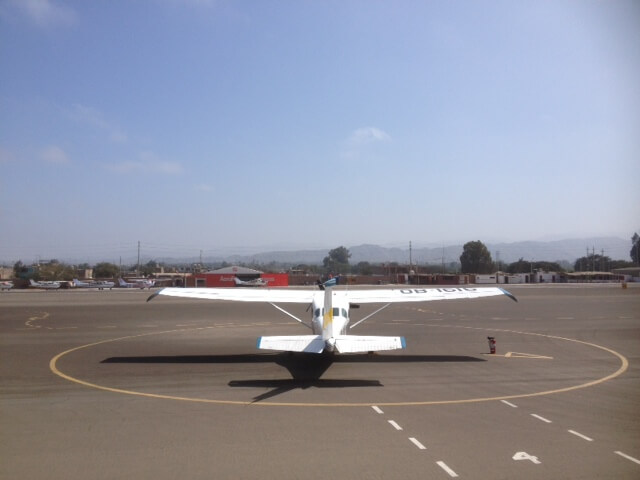 While traveling with Tucan Travel, our tour group had the option to pay an extra USD $110 to fly in a little plane around the Nazca Lines. At first, I wasn’t really interested in doing the flight. I had heard about the Nazca Lines briefly in school, and learned how they were around 2000 years old and made by an ancient civilization.

When the time came for our tour group to tell if we were doing the excursion I happened to be the only one who chose not to do it. I was thinking, um…. what am I going to do by myself in the hotel? I stood there awkwardly being the only one who didn’t have my hand up. Then, everyone in our group started telling me that this was a ‘once in a lifetime experience’ and how ‘the Nazca Lines are one of the seven wonders of the world’. So, because of peer pressure, I decided to do the flight.

On the day of the flight, I was feeling a bit apprehensive. I wasn’t keen on wasting USD $110 on something that I didn’t really want to do. I figured that I wouldn’t ever go back to the city in my entire life, so I might as well go.

I’m the type of person that is prone to motion sickness, so while driving to the airport, my mom warned me that the flight would be turbulent. I thought to myself, “Thanks for telling me now. It’s way too late to back out.”

It was still cloudy out when we arrived at the airport, so we had to wait in the ‘terminal’ for another 2 hours. The airport was microscopic, and the control tower was a one story building, so there wasn’t anything to do in the terminal. There were some gift shops outside and a little café, so I paced around for the whole 2 hours. It was really boring and dull in the airport.

Finally, the sky cleared up, and the 12 of us from our tour group boarded the plane. I was expecting a boring flight around the lines, but it ended up being a lot worst than that. We took off, and then started flying around the lines. About every 5 seconds, I would feel weightless.

At first I felt fine. Our little plane would turn at extremely tight angles, and at one point, I saw the pilot’s gauge, and it showed that we were almost completely on our side. The lines weren’t as big as I expected and they were hard for me to pick out among the rest of the sand.

About 3 turbulent minutes into the flight, I started thinking that I wouldn’t be able to keep my breakfast for the next 17 minutes. It was a mixture of the turbulence, tight turns and weightlessness that made me feel sick. I looked around the plane, and saw that about half of the people had their barf bags ready, just in case.

After we flew by the condor, I couldn’t bring myself to look out the window. Just after that, the man behind me threw up. In my head, I was preparing for the worst. This could start a chain reaction….

I knew that if I smelled the vomit, I would be next, so I quickly started breathing from my mouth. For the rest of the flight, I clutched my seat with my eyes closed while holding my nose and chomping on my flavorless Trident gum. People around me were freaking out. I gagged several times and prayed that we would land. At the 18th minute, I was about ready to spew, but then I noticed that we were preparing to land, so I ‘manned up’ until it was over.

Once on the ground, our entire tour group rushed to get out of the plane. All of us except for two were feeling terrible. One guy in our group looked green! Thankfully only one person threw up.

Maybe it was a waste of USD $110, and 20 minutes of my life, but I guess you could say it was worth the experience. We never really got any good photos from the flight either. At least I have an interesting story to tell for the rest of my life.

Have you ever had a disappointing travel experience? Leave your comment below.

« My Issues With Gore-Tex
White Water Rafting in the Snow, Salta, Argentina »