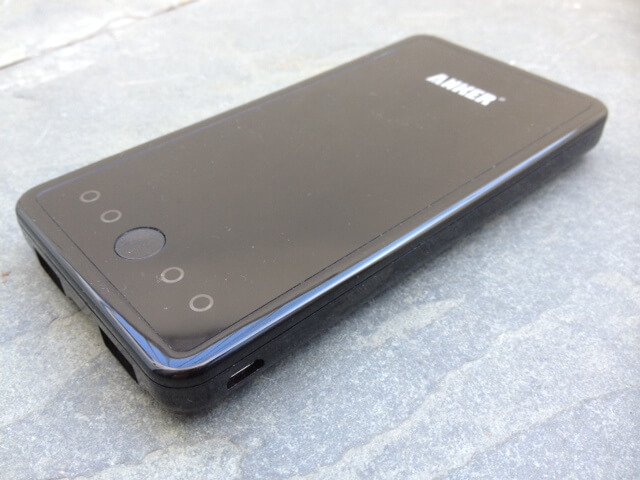 My main purpose for buying the Anker Astro3E 10000mAh External Battery was for traveling. While overseas, or traveling in general, it’s usually hard to find outlets, let alone outlets with the right voltage. Thankfully, I can charge the Anker External Battery a couple of days before a trip, then use it to charge an iPad, iPhone or both at the same time. When on airplanes, the external battery is extremely helpful because it dramatically increases the battery life, keeping you from being disconnected. Also, while my mom, dad, sister and I were on a camping trip across South America, we used the external battery frequently to keep our devices charged. We’ve been saved several times by the battery when there were great photo ops, but no outlets, like at the salt flats in Bolivia.

After using the external battery for about 6 months, I came up with a complete list of pros and cons of the battery: The power capacity of the Anker External Battery is probably the standout feature. The capacity is 10000mAh, which in plain English means that you can charge your iPhone about 4 to 5 times with a fully charged external battery. It can also charge my iPad 2 once, but it can’t completely charge the newer 10 inch iPads.

Read more: What Does mAh Mean? The mesh pouch isn’t anything really special, but it was a nice addition to the battery. It’s not very protective, but it can protect the Anker External Battery from scratches. Another useful feature of the external battery is that there are 2 USB ports to charge your devices. That allows for two iPhones to charge at once, or even an iPhone and an iPad. I’m not sure if the battery can charge 2 iPads at once, because I don’t have two iPads. One output port has the word ‘Android’, and the other one has the word ‘Apple’. I’ve used both ports and they seem like they are exactly the same. It was a pretty big concern for me when I noticed that I had fully charged the external battery a week before, and there was only ¼ of the battery left after not using it. I would recommend charging the external battery the day before you want to use it, just in case. Other than that it has been working fine.

The battery doesn’t include a wall plug thing, so you need to plug the USB input connecter into an existing USB to wall charger. I usually use the iPhone charger, but that takes around 6 hours to charge it completely. Sometimes, I use the iPad charger, which makes it a bit faster. If there was a wall charger, it would be a bit more convenient.

The blue circles on the bottom of the charger show the amount of energy still in the battery. Once you plug your device into the USB, make sure to press the button in the middle of the circles, or else it won’t start charging. When the blue lights light up, you will know that it’s working. Overall, I think that the Anker Astro3E 10000mAh External Battery is a great investment, especially for travelers. So far, it’s been a really good purchase and I would highly recommend it.

You can get the Anker Astro3E 10000mAh External Battery here on Amazon.