You have 24 hours in New York City. You want to see the view from the top of the Empire State Building, photograph Times Square, walk down 5th Avenue and of course visit a museum.

There are hundreds of museums in New York City and you can’t possibly visit all of them. Two of the most popular, the Guggenheim and the Metropolitan Museum of Art, commonly known as the Met, are frequently visited by travelers from around the world. Considering both are large you’d probably only have time for one museum, but which one should you choose?

The Metropolitan Museum of Art:

Founded in 1870, the Met is the largest art museum in the United States, at 2,000,000 square feet according to HumanitiesWeb. Being a member of the Met, I’ve visited the museum several times and have also joined one of their teen programs. The museum is so large that if you want to thoroughly see all of the art, you’d probably have to spend several days there.

The Guggenheim, named after Solomon Guggenheim, a philanthropist and art collector, is home to modern and contemporary art. I’ll admit, I’ve only been to the Guggenheim once, but that’s because I’ve pretty much seen the entire collection during that one trip and don’t feel the need to go back.

Ads for the Guggenheim claim “If this is the frame, imagine the artwork.” Unfortunately, the artwork doesn’t live up to the architecture. I’m no art critic, but compared to the art in the Met, Guggenheim falls short. The Metropolitan Museum of Art is home to some truly legendary pieces, including Washington Crossing the Delaware by Emanuel Leutze whereas the Guggenheim has the Variant On Ancient Ground by Josef Albers.

While the Guggenheim has just paintings and framed artwork, the Met contains paintings, ancient artifacts (including an entire Egyptian temple), instruments and more.

I don’t know much about art, but I’ve heard of Rembrandt, van Gogh, Goya, da Vinci and Picasso. But I have no idea who Rudolf Bauer, Amedeo Modigliani or Oskar Kokoschka are. Maybe I’m just living under a rock…

Overall, the Met has the better art. 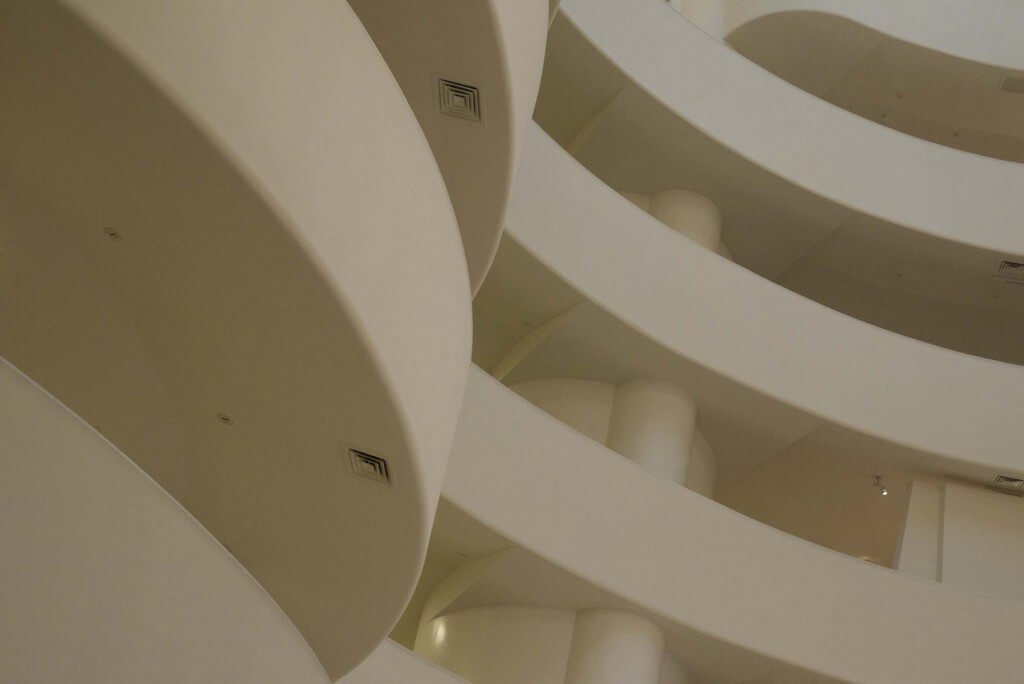 I’ve been a bit harsh on the Guggenheim thus far, so I’ll have to admit that the Guggenheim museum’s architecture is extremely unique and picturesque. The spiral interior moves at a gentle incline, meaning that stairs aren’t needed to move up the floors. The entire museum is basically one giant sphere. The center of the museum is open, allowing you to view the spiral from all sides.

The architecture of the Met isn’t nearly as unique as the Guggenheim, although it is somewhat historical since it was made in the late 1800s.

Strangely, when I went to the Guggenheim, there was a protest against the poor working conditions of migrant workers building a new Guggenheim museum in Abu Dhabi. Be sure to read about my experience in the Guggenheim during the protest. It was a truly bizarre sight.

Several staff members at the Met are volunteers who are clearly passionate about the art and the museum. During the several occasions that I’ve gotten lost inside the Met, there have always been helpful staff to send me in the right direction. You are allowed to take pictures inside the Met. The Met also has art programs for kids and teens.

Admission to the Met on a ‘pay as you wish’ basis, however the recommended amount is $25 per person, and almost everyone seems to pay $25. Apparently paying 1 penny is acceptable, however visiting the Met is definitely worth the recommended $25. There is also an option to pay $6 to borrow a headset loaded with recorded explanations of the art pieces. If you plan to visit the Met often, it’s a good idea to become a Met Museum member. To become a member you donate a certain amount of money, then get to go to the Met for free for the year, get the headset for free and other benefits.

It costs $25 for adults to visit the Guggenheim museum. I believe they have a membership program as well. Refer to the screenshots for more information.

If you had a limited amount of time in New York City and had to choose between either the Met Museum or the Guggenheim, you should choose the Met Museum. Hands down. The Met blows the Guggenheim out of the water in terms of artwork, significance and facilities. Although the Guggenheim does have a picturesque interior and exterior, quality of the artwork and sheer size of the Met makes it the better option for visitors to NYC with a tight schedule.

The main appeal to go to the Guggenheim museum is its architecture, so you could potentially walk from the Met to the Guggenheim, snap a pic of the exterior, then leave. Both museums are along the Museum Mile and are walking distance from each other.

Be sure to check out my other museum comparison post, The Hermitage vs The Met Museum.

Which museum do you prefer? Leave your comment below.